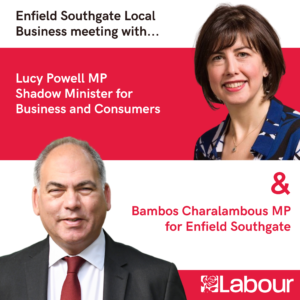 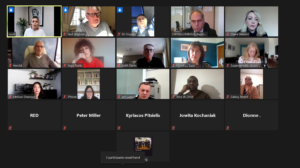 Local businesses that have been hit hard by the pandemic, joined Labour’s Shadow Minister for Business and Consumers, Lucy Powell MP and I, to talk about what support they need now, and over the next 12 months.

While some businesses have made huge profits from the pandemic, many more are on the brink of collapse. As Lucy Powell rightly pointed out in our meeting, the original support for businesses from the Government was designed for a three-month shut down, not 12 months. Businesses face a cliff edge and a £50bn bombshell in April when support comes to an end.

Although business grants have been welcome, they still don’t go far enough for some businesses. Many have fallen through the cracks and have received no money at all. Local councils are under pressure with no extra resources to administer grants and are grappling with slow, restrictive, and complex guidance on where financial support can go. As a matter of urgency, I am taking up issues that local businesses have with outstanding grants from Enfield Council. The recent additional grant money to local Councils is not even enough to absolutely guarantee every businesses’ survival, but it absolutely vital to saving as many as possible.

Revenue-based grant schemes have been used by some European Countries and seemed to have worked much better for businesses. Perhaps the Government’s intention was right, but the mechanisms and scale of support have fallen short.

Local businesses, from a wide range of industries – weddings, wellbeing, garments, hospitality, transport, all raised serious issues that are being felt by the business community up and down the country. Some landlords are ignoring the code of practice, putting businesses in incredibly vulnerable positions, insurance companies are refusing to pay up, there’s a lack of parity for businesses on social distancing measures, the Government has failed to appreciate the seasonal nature of some industries and some have been unable to keep on trainees and apprentices, jeopardising the future of whole sectors. Not to mention the depleted personal financial resources of business owners who now feel there is only a very bleak future ahead.

The asks were clear: an extension of the business rates holiday; sector specific support that will keep them afloat and sustain their futures; furlough extensions; government backed insurance for some sectors to give confidence to consumers; and extra resources to speed up the process of paying out grant money.

Labour are backing the business community in their call for more support. We’re calling for an extension to the business rates holiday and an extension to the reduced rate of VAT. The Chancellor has a chance to make this a reality in this week’s budget. He also has a chance to heed our calls for a ‘smart’ extension to furlough alongside urgent action to fix the youth unemployment scheme and support for job creation. Sunak could park all the CBILS and Bounce Back Loan debt into a separate bank. Labour would establish a new British Business Recovery Agency to manage all the loans and offer businesses more options to deal with the debt they’ve taken on, including only demanding repayments for Bounce Back Loans for small businesses when they are actually growing again.

If the Government doesn’t take action, hundreds of thousands of businesses could go bust in the next three months. That will put almost two and half million jobs at risk.